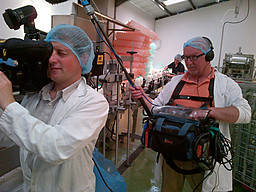 Today’s killer stat: the world demand for milk is increasing by about 2.5% per year which is equal to the entire annual milk output of Britain or approaching 7,000 Olympic swimming pools. Yet despite the fact that we have the perfect geography for dairy production and great know-how in the business, our milk industry is in serious trouble. This week Countryfile is in the white stuff. We’re filming an investigation to try and discover why our dairy farmers say they are are paid such rotten prices. Sainsbury’s were good enough to let us in and, after considerable health and safety discussions, I actually got to push one of those upright cage trolleys full of milk out of the cold store and onto the shelves. In interview, their own brand director Judith Batchelar, said they pay farmers a few pence more than the cost of production: just shy of 31p per litre with further bonus payments if they hit various welfare or environmental goals. Their standard price per litre of milk on the shelf was 52p, less than much of their bottled water. Many shoppers volunteered that they would willingly pay more if they knew it was being passed on to the farmers but Judith had her doubts. In supermarket jargon milk is a KVI – known value item – on which customers will compare prices. Even if they don’t do it in the aisle, on checkout they might suffer `till-shock’ - quaking at the size of the bill and combing through it to scrutinise costs. Judith Batchelar was certain: unilateral higher milk prices would drive some customers away. I was impressed by her candour and I don’t want to be too hard on Sainsbury’s, not least because they gave us access and didn’t dodge the questions but also many farmers say they are more generous than most other big retailers. Most processors also closed the door on us but a smaller one was did give us sight of the bottling plant and explained how he had been forced to drop his price to farmers as he was getting less from his buyers. Whilst there, we also met Kevin Bellamy, a banker who specialises in dairy investment, who was an encyclopaedia of world trends. He revealed that Chinese mothers are increasingly going out to work and feeding their babies and toddlers powdered milk in the belief this high protein ‘Western’ diet will make their children tall and smart. True or not, it sounds like an opportunity for farmers but as yet we can’t reach that market. On leaving I met three dairymen discussing whether to escalate their protest by pouring all their production down the drain for one day. You know the industry is dysfunctional when farmers are cheering not crying, over spilt milk. IMAGE: The crew hard at work filming in a milk processing plant.
Posted by Tom Heap at 12:36 No comments: