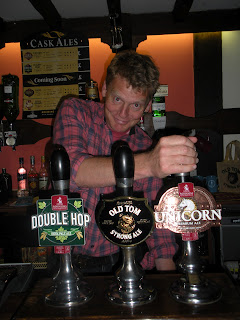 Blogging from a bar, it could go one of two ways - rambling or unusually creative. We’ve already encountered the dilemma of whether to drink or not during interviews shot in a pub. Abstaining looks unnatural, but imbibing risks drunkenness on set and continuity problems as the level in the glass moves up and down. Both are cardinal sins in the BBC handbook! This week we are investigating the plight of Britain’s village watering holes, as around four are closing every week. How can this be when everyone seems to treasure them so deeply and tourists say they are the third most important reason for visiting this country? Today we’ve been in the Derbyshire village of Parwich, filming in the Sycamore. One secret of survival here is opening another business in the pub. In fact when you walk in the door it looks more like a family home. But on the right is a door marked ‘shop’ – it used to be the dining room. It may be small but it’s an Aladdin’s cave of household goods - puncture repair kits and packing tape, cauliflowers and lighter fuel. Janet, the publican/shopkeeper/mother of a toddler, says she simply stocks what people want. What she’d like is for locals just to spend a bit more with her and swerve the supermarket delivery van. It’s a devotional existence, more like a calling than a job. Janet puts in around 80 hours a week and, when she plots income against her time, she receives barely half the minimum wage. Most pubs are owned by either breweries or big pub companies. Many of these are in serious financial trouble, some owing billions to the bank. But their spokesman insisted they weren’t leeching money from the local boozer to pay off their debts, blaming instead the government for high duty and VAT on alcohol. Every year I make the same, not very pious, New Year’s resolution. Drink more… in my local pub. Achievable with a noble aims!  Why not join the pledge? 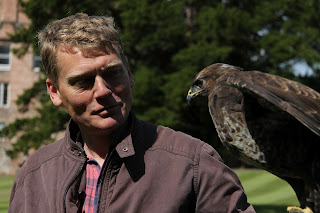 In the backyard of a small pebble dashed semi, just south of Edinburgh, we found a father and son scanning the sky. Peering intently above the roof tops and shading their eyes from the bright cloud. Even as we talked they cast nervous glances to the heavens. They fear ‘death from above’, not for them but their prized pigeons. What most people would welcome as a wildlife success story - the gradual recovery of many of Britain’s bird of prey species – they view as a deadly threat to their pets and their passion. They’ve lost six in the last six months this year. Watching a peregrine falcon hunt a pigeon is like a “Ferrari taking on yer’ Astra” according to William – a pigeon fancier from the age of seven who, now approaching sixty, has just given up as he can't bear the growing death toll.
This week we are filming an investigation into the impact of our growing birds of prey population: majestic kings of the air restored to their rightful dominion of the sky or a menace to game, pigeons and garden birds? The lordly language above has been prompted by another filming location. Dalhousie Castle was the last redoubt in Scotland to be besieged by an English King in person: Henry IV in 1400. There we saw our most successful bird of prey – the buzzard – whose numbers have doubled in the last fifteen years. We needed some stunt birds for close ups and controlled filming so the local falconer Denise flew Dolly and Watson. Graceful in flight, stunning in detail but still faintly chilling sitting on my thick glove, especially as they turn to fix you with those hawk-eyes. I know what it feels like to be lunch. So do pheasants. Especially those reared for shooting on a nearby estate where the gamekeeper reckons they kill one thousand of his birds every year. He wants permission to kill or move the local buzzards. “But surely” I said “they are part of the natural world undeserving of extermination for your sport”. “No, pheasants are my livestock and my livelihood and like a farmer I should be allowed to protect them”. Another thorny one: see for yourself on CountryFile BBC 1 Sunday July 1st.

“Removing the lid from that flask would be a rapidly life limiting experience”. This potent understatement was delivered this morning as we filmed examples of waste nuclear fuel for which Britain is still struggling to find a long term home. We were at Chapelcross in Scotland – one of the country’s oldest nuclear reactors built back in the fifties primarily to provide weapons grade plutonium but also producing useful amounts of electricity for the grid. Now being decommissioned,  the spent fuel is shipped off site in cubic bomb proof flasks ( I love the way they call them flasks – it makes them sound a bit like your Gran’s thermos of warming tea on a blustery beach). First stop is Sellafield before some material joins the growing pile of Nuclear waste we don’t know what to do with.
We are investigating the plans for deep underground burial, a project of mind stretching scale: bigger than the channel tunnel, covering 20sqkm underground, throwing up spoil heaps the size of 2 pyramids of Giza, taking two lifetimes to complete and designed to contain the radiation below for longer than mankind has walked the land above .
“Hands up who wants that” asked the government and so far the only credible volunteer looks like being West Cumbria – the seaward skirt of the Lake District where Sellafield sits and delivers more than one billions pounds every year to the local economy alongside plenty of jobs.  So, politically plausible but what about the geology….errm… Not quite so attractive according to an expert who took us for a walk along the cliffs at nearby St Bees. Showing us cracks in the sandstone where water seeps out today, he predicted that, if the plans went ahead, that water could be irradiated in a couple of hundred years and, in half that time, radioactive gases could seep to the surface. “The geology’s much better in Norfolk, between Cambridge and Norfolk” he said. Not a claim likely to feature heavily in the ‘Visit East Anglia’ brochure and not all geologists share his doubts about Cumbria. But it does raise an interesting question.
Should radioactive waste be buried where it is popular or where it is safe? Critical viewing on CountryFile BBC 1 Sunday 17th June.
Posted by Tom Heap at 04:01 No comments: